Some landslides move slowly and cause damage gradually, others move so rapidly that they can destroy property and take lives suddenly and unexpectedly. Gravity is the force driving landslide movement. Factors that allow the force of gravity to overcome the resistance of earth material to landslide movement include saturation by water, steepening of slopes by erosion or construction and earthquake shaking.

Landslides are typically associated with periods of heavy rainfall and tend to worsen the effects of flooding that often accompany these events. In areas burned by bushfire a lower threshold of rainfall may initiate landslides.

Debris flows, sometimes referred to as mudslides, are common types of fast moving landslides. These flows generally occur during periods of intense rainfall. They usually start on steep hillsides as shallow landslides that liquefy and accelerate to speeds that are typically about 16kph, but can exceed 50kph. The consistency of debris flows ranges from watery mud to thick, rocky mud that can carry large items such as bounders, trees and cars. Debris flows from many different sources can combine in channels, and their destructive power may be greatly increased. They continue flowing down hills and through channels, growing in volume with the addition of water, sand, mud, boulders, trees and other materials. When the flows reach flatter ground, the debris spreads over a broad area, sometimes accumulating in thick deposits that can wreak havoc in developed areas. 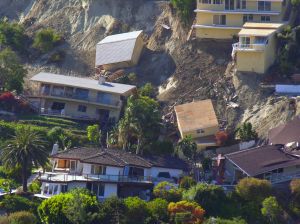